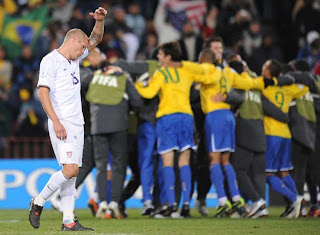 Well, I've been stewing on the U.S. Soccer loss to Brazil for a few days now. The Americans suffer from Multiple Personality Disorder, and apparently sent two different teams to this Confederations Cup tournament this month in South Africa. For the first two games and the second half of the game against Brazil, the Americans apparently fielded a hapless bunch of half-hearted defeatists. Against Egypt, Spain and for one half against Brazil, they sent a world-class squad of soccer players. I'd like to see more of that squad.

The conventional wisdom I'm seeing browsing U.S. press coverage of this tournament is all touchy-feely happy talk about how the team exceeded expectations, how they played well, how they tried hard, etc. What a load of bull. It's poppycock and I'm not having any of it.

This team needs to understand that they fell apart. Any other interpretation of events is self-deception. In the FINAL of a major international tournament, America's A-Team of experienced international professionals blew a 2-0 halftime lead by playing too defensively and failing to maintain possession of the soccer ball. Everything that was working for the U.S. in the first half stopped working. The primary problem was turnovers, the result of unforced errors and bad tactical decisions. The team's fitness is also a shortcoming, because they looked gassed at the end of 90 minutes, and the Brazilians did not.

If a baseball team coughs up a late-inning lead in the playoffs, or a football team blows a 14-point second-half lead in the Super Bowl, if a hockey team gives up 3 goals in the third period, the healthy reaction is to point some fingers at themselves and account for what went wrong.

All this talk about moral victories and valuable experience enables a loser's mentality -- the idea that the team really had no business being in the final in the first place. But I've seen this team whip Spain and Portugal in major tournaments. I've seen them go toe-to-toe with Italy in a World Cup which Italy ultimately won. So maybe it's time to start getting used to the idea that our boys belong on the world stage, and to hold ourselves to the same standards our opponents do.

"We're at the point where we don't want respect, we want to win," said Landon Donovan, whose goal in the 27th minute gave the United States a 2-0 lead. "There's no guarantee we ever get back to a final game like this, so it's disappointing."

I'm with Donovan. If the U.S. had played 90 minutes of neck-and-neck soccer against Brazil and come up just short at 3-2, maybe I'd buy the sunny talk. But in this game, in an incredible position to win at half-time, the squad fell apart. They ought to be angry about it.

According to WikiAnswers, about 150,000 people die every day on this planet. On June 25, Michael Jackson, a talented but troubled star, was one of them. If I tell you that, honestly, I don't care any more about his death than the other 149,999 others, does that make me a bad person?

I understand that Jackson's death is a notable news occurance, as the deaths of famous people often are. But what is really added to the conversation by the 10,000th bad interview with someone who knew him tangentially? How is our understanding of the world deepened by yet another 10 minutes of inane, uninformed blather and speculation about which drugs the man may or may not have ingested? And aren't these solemn "memorials" to Jackson all over my teevee in somewhat poor taste, considering that whether or not the old pervert was convicted of any crimes, he freely admitted having strangers kids sleep in his bed? I mean, isn't there a disconnect there?

No, I don't mourn the man. I never met him. People seem to think because he peers out at them from their CD rack, and because they've seen a lot of footage of him in courtrooms on their teevee, they have a personal relationship with the man. Well, I see James Carville and Wolf Blitzer a lot, too, and I don't feel much of a relationship with them, either.

On the other hand, I remember being really moved when Johnny Cash died. And I never met him, either. But I was moved by the story about the loss of his wife, June Carter, and the way he threw himself into recording new material in the last few months of his life. It never occurred to me, though, to drive down to the hospital and stand vigil for the man, or to build a maudlin online memorial. For the life of me, I can't understand what that would have added to the Universe.

Apparently the soon-to-be-former governor from South Carolina had his own stimulus plan in mind when he tried to turn down the federal government's largesse. I mean, we all understand that these blow-dried hypocrites are getting a little action on the side, but when your action on the side is on the other side of the equator, that just shows a disregard for American jobs. At least Gov. Spitzer was keeping Americans employed with his sexual peccadilloes.

There are other things in life besides mayhem, madness and butchery, a fact South Carolina's Republican Gov. Mark Sanford was kind enough to remind us of this week. There is irony of the purest ray serene; there is hypocrisy like a house on fire, and there is perfect comedy, and when a man like Governor Sanford takes the time and energy to combine all three, the magnificent absurdity of it all reminds us of the joy that still exists in this cruel and crazy world. 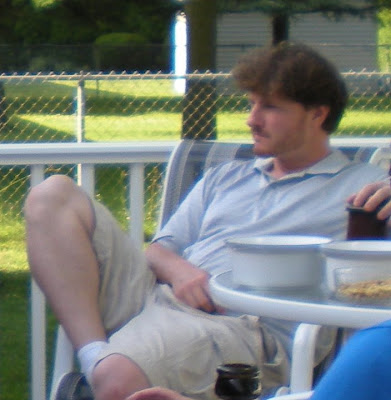 I'm on the phone now with James at AT&T. We've considered eliminating our land line completely, but the new father part of me says we'd only need 911 one time to justify keeping it. And all our friends have the number. So instead, I'm cutting back what I can.

First, I'm having him drop our long-distance service, since a look at our last bill shows 4 long-distance calls made last month, a total of about 20 minutes, which cost us about $14. Obviously, that's not worth it when we have cell phones which work just as well. Now James is telling me that there's a one-time $9 fee to get rid of them. In an actual free market, you don't pay service providers for the honor of NOT using their service, but we live in a corporatarchy. And they wonder why people are ditching their land lines?

I'm also getting rid of the Non-Published Service, which is costing us $5.50 a month. Having an unpublished number is nice, since it keeps annoying spam calls to a minimum. But is it really worth $66 a year? I guess we'll find out.

If I start getting a bunch of telemarketing calls, I can always just get rid of the phone line altogether. If I can afford the fee for that, that is.
Posted by scot s w at 3:47 PM 3 comments:

It's hard to wrap your mind around the devastating blows the state of Michigan has been taking, but this may help put things in perspective: The state just canceled $740 million in (badly needed) road work because it doesn't have the money to match federal highway spending. The math isn't all crystal clear from the Detroit News story, but at one point it's mentioned that the state stands to lose $576 million in federal money, which will be distributed to other states. The rich get richer and the poor get poorer.

So here's the obvious solution: We raise a couple hundred million in taxes, and the feds send over half a billion dollars our way, which we can spend on good jobs for Michiganders, improve our infrastructure, attract businesses and so on... Seems like a NO BRAINER, right? It's like getting those matching 401(k) dollars from your employer: You tighten your belt somewhere else in order to get all the matching money that's on the table. Only a fool would be so penny-wise and pound-foolish as to give away that kind of free money.

Unfortunately, Michigan has just such a fool. Now, I understand that Republicans have a deep feeling that we shouldn't raise taxes. Ever. Under any circumstances, including war or economic catastrophe (because those are the present circumstances). But doesn't this seem like it would be money well spent? Not so, says the top Republican in the Michigan Senate -- a man worried, as always, about winning elections rather than putting food on your table. Senate Majority Leader Mike Bishop says, "Citizens have been clear about not paying higher taxes in this economy."

Hey Mike: Get the money. "This economy" desperately needs this work and this sort of federal investment. There are few better ways to invest the taxpayer's money than in some modern roads. We're all fed up with Michigan's crappy highways, and they drive away vital investment.

Discussing this story with my friend Sue, she tells the story of Gov. Jennifer Granholm bringing in a CEO who was thinking of moving his company to Michigan. As the story goes, they pick him up at the airport, but before they get to the meeting he says, "I've seen enough. There's no way I'm moving my company to a state with such awful roads." Is the story true? I dunno, but it sounds about right to me.
Posted by scot s w at 8:41 AM 6 comments: