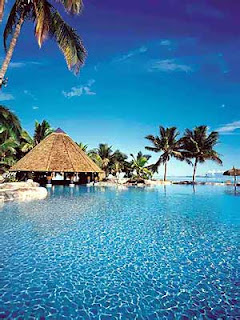 Message from the Non-Natives in Fiji:

"We're having a
WONDER-R-R-FUL
time."

It's sunny and 90 degrees, with nothing but a few fluffy white clouds in the sky. The breeze is hot but not too humid. It's a typical Brisbane summer day, and of course it's the first one we've had since we've been here. We leave tomorrow.

The Pyne's house on Payne street (at the corner of "Hume and Payne" as it is often joked -- pronounce it out loud) sits in a tranquil little valley which blocks out the sounds of City traffic which you would hear just a few blocks either way. You can hear the music that various neighbors up the hill might be playing. While we've been here, a house at the top of the ridge to the south of us has been undergoing renovations, and we can hear all the construction noises at a comfortable distance.

Tonight we're planning to have a few of Tony's friends over for a "bon voyage" of sorts, and it sounds like we're going to get absolutely plastered. Tony's ambition is to empty the liquor cabinet, or at least make a valiant attempt to do so. He and Irene are off to buy the mixers and some snacks to see us through.

So I'm sitting here on a teak verandah next to the pool, working furiously to get the work done for my weekly deadline -- or at least reach an acceptable quitting point. Because I know that whatever ain't done by 7 or so, well, it ain't getting done.

We've had a fantastic time, and have seen a good deal of cricket. Not only have the Indian and Sri Lankan teams been in the country this summer, but we've seen quite a few of the boys' matches. Josh and Jimmy are both turning into formidable bowlers. Josh is a spinner; Jimmy is a fireballer.

Australia is a friendly and happy country. You don't sense the same sort of dissatisfaction, alienation and angst that you often feel in the U.S. -- at least, anecdotally I can tell you I haven't felt it. I'm sure the weather has something to do with that, but I think it's also the approach to work and play. There's a healthier balance here. I like that. Who wouldn't?

We're heading back to Michigan after a few days layover in Fiji. Back into the freezer, as it were. Cold weather is hard work; there's no way around that. Just going about day-to-day operations is hard. There are lots of little inconveniences and discomforts, and we pretend we like it to get us through. We tell ourselves that we'd miss winter, that we like the snow. We like to think enduring cold winters builds character. We ought to consider the possibility that it just makes us disagreeable.

See you all soon, friends. If they sober me up enough to put me on that plane to Fiji.
Posted by scot s w at 12:01 AM 5 comments:

That's not Earl the Pearl... 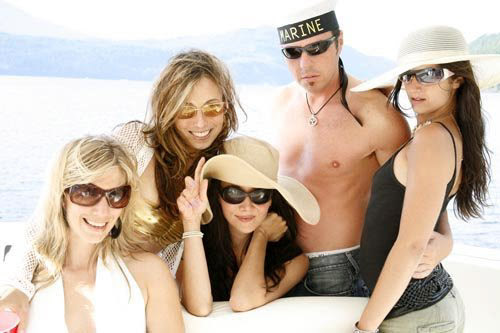 (Sorry, inside joke. Apologies to those who don't know the real Earl the Pearl.)

Edit: Tip of the cap to the hilarious HCwDB blog.
Posted by scot s w at 11:32 AM No comments:

This, for real, is the forecast for the coming week in Brisbane, Queensland, Australia:

And, um, yeah, those temps are in degrees Celcius, so it should be pleasant when it's not showering.
Posted by scot s w at 10:59 AM 3 comments:

Following up on Bhutto's bombshell

I've uncovered a further twist in the Bhutto/bin Laden story. (Read the post below first to get the full story on this). After explicitly saying on Nov. 2 that Osama bin Laden had been murdered, Bhutto apparently referred to bin Laden as presumably alive ten days later:

Lahore, Nov 13 (PTI) In a significant shift in her stance, former Pakistan Premier Benazir Bhutto Tuesday asked General Pervez Musharraf to quit as President and ruled out serving under him in any future government after she was put under house arrest for the second time within a week...

The former prime minister, who was earlier on Friday put under house arrest in Islamabad to stop her from addressing a rally in the nearby garrison city of Rawalpindi, said more than 7,000 of her supporters had been arrested overnight.

"This is just terrible, that the police who should be used to find out where Osama bin Laden is hiding are focusing their attention on my supporters. There is a total revulsion of the naked force used against peaceful protesters."

So, ten days after the interview I mention below, Bhutto is quoted by the Press Trust of India as saying that Pakistani police should be looking for bin Laden. Which would seem to suggest Bhutto accepts the premise that bin Laden is alive. That would support the BBC's supposition that she simply misspoke. On the other hand, if you're a conspiracy theorist, you might think it just indicates that "they" got to her -- "They" being the people who stand to benefit from maintaining a fiction that bin Laden is alive.

Whatever. It's very mysterious. But the key is, it's a mystery THAT SHOULD BE COVERED BY THE PAPERS. Maybe they can pull some people off the non-existant Republican presidential campaign.

Or better yet, off Briney Spears' front porch. At least those reporters are good at finding people.
Posted by scot s w at 1:13 PM 1 comment:

The biggest story not covered in my lifetime.

Well, I've Googled and I've looked in Factiva, and haven't found a single mainstream U.S. news source which has a single mention of this. Zero coverage. And this is beyond odd.

Benazir Bhutto, the former Prime Minister of Pakistan and leader of the flawed-but-ultimately-democratic opposition in that country, was assassinated earlier this year. Who was ultimately behind the act, we may never know. We do know that the government, led by her adversary, is using the event as an excuse to target a warlord. Now this guy may have been guilty up to his ears, or maybe he wasn't. But in the labyrinthine world of Pakistani politics, nothing is really what it seems, so it seems.

But you know what is really odd is that a few weeks before her murder, Bhutto gave a prescient interview to Sir David Frost, formerly of the BBC, but now doing a show for Al Jazeera in English. The date was Nov. 2, 2007. The occasion was the previous attempt on her life, and she was discussing -- in astonishingly cool-headed terms -- the various parties who would try to kill her.

LINK to the video

Frost asks (about the 3:50 mark) if anyone knows who was responsible for the assassination attempt, and if reports were true that she had arranged for a letter to be delivered to President Musharraf in the event of her murder. She confirmed that she had written to Gen. Musharraf. The letter named various people in the goverment who might be behind organizing various terror-linked groups to have her killed.

Said Bhutto: "I sent back a letter saying that while these groups may be used, I thought it was more important to go after the people who supported them, who organized them, who could possibly be the financers or the organizers of the finance for those groups..."

Eerie, to be sure, but here's the real barn-burner: Frost asks her if the three people named were members of, or associated with the government. Bhutto says yes, then (at the 6:00 mark):

"One of them is a very key figure in security. He's a former military officer... He also had dealins with Omar Sheikh (ph.), the man who murdered Osama bin Laden. Now I know..."

TO RECAP: The former head of state of Pakistan, and the then-current leader of one of the political parties, said clear as day that Osama bin Laden had been murdered.

The BBC ran the interview, too, on its Website. But somehow, felt that the claim about bin Laden's murder should be omitted from the replay. You can see the two videos back-to-back here:

LINK to the "back to back" video

The fact that there has been no coverage in the media of this issue is not merely odd, it's dereliction.

All I found was a mention in the Philippine Daily Inquirer, a letter to the editor of the Hattiesburg American (located in Mississippi) and a tut-tut item in the "Day and Night" briefs column of the UK's Daily Express, chiding Sir David Frost for failing to follow up on the HUGE bombshell that Bhutto had just fed him. Thankfully, the Express reported the BBC's explanation for the edit:

A BBC spokeswoman confirms: "During the interview Ms Bhutto made an allegation that Osama Bin Laden had been murdered by Omar Sheikh.

This claim was so unexpected that it seemed most likely that she had mis-spoken and had intended to say that Omar Sheikh was the man who murdered US journalist Daniel Pearl, not Osama Bin Laden.

"A decision was therefore taken to edit out the reference. With the benefit of hindsight the interview should have been reproduced in full or not used at all." Alas, following her assassination last month, we'll never know if Bhutto meant what she said or not.

Well, I guess that's that, then, right? Nice and tidy. Oh, nevermind. The briefs column then immediately dives into a story about George Harrison stashing away old Beatles costumes. Nicely done, Express. Looks like you bungled the story, too.

Look, the issue isn't whether she's right or not. This should have been a fundamental fact mentioned in EVERY SINGLE STORY about Bhutto's assasination. The mere fact that someone of such importance even uttered such a claim -- that the words passed over her lips even once -- should be worldwide news. It deserves a great deal of digging and follow-up from teams of energetic reporters.

But it can start with one reporter. In any paper.
Posted by scot s w at 12:24 PM No comments:

A lot of your freedom died yesterday.

The storms down south have killed more than 50 people, and devastated some pretty widespread areas. The story of these unseasonal storms was eclipsed somewhat by the SuperTuesday primaries. The area is very much in need, so help if you can.

"Monkeyfister" is blogging exclusively about the storm damage, and appealing for donations to charity.
Posted by scot s w at 9:34 AM No comments: