Dad asked my opinion on the Democrats' collapse on the Iraqi War deadlines. I would say that they were defeatist and surrender-oriented -- and that was about their own positions on the issues.

Here's a political party which stormed to the majority in November largely on the basis of two issues: Iraq and corruption. People want us out. Now. They were sold a bill of goods on this war, and they know it. And they don't have any interest in sacrificing more of their boys so that the oil companies can carve up the Iraqi fields.

The Democrats simply caved, and that's the story. They punted until September. No ifs ands or buts, from my point of view. They abandoned their mandate.

I dunno what else to add, really. It's like, if you watched the Golden Gate bridge collapse, you'd know it was a really, really bad thing. That's how the Democrats collapsed. And what mrore can you say?

Back from the northwoods

I have a mountain of dirty clothes, my lawn is a jungle, and the gardens need tending. But we all had a great time up north of Seney, MI for the Memorial Day weekend. We fished a trio of lakes and a large number of fish were caught -- and released. Tdec31 caught the first Northern Pike of her life, and then the second and third.

We also visited "Dunes," a restaurant which also goes by the name "Lake Superior Brewery" up in Grand Marais. "Grand" as everyone knows, is French for "large" and we deduced that "Marais" probably means "tits." We're very sharp after a couple of brews.

No photos as yet, alas, because we didn't take our camera. Cookie had her camera, and got a snapshot of Tdec's historic pike, so we hope to be able to post that soonish.

I'll sort out all of the world's ailments in upcoming posts.

I'm experimenting with a new blog.

Tell me what you think.

(note): The family is coming home from
the wilderness today.
Posted by Bud at 7:39 PM No comments: 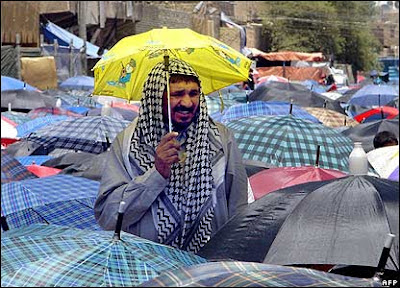 Vote for the Best Caption or create one of your own:

2. They say it never rains in Southern Anwar Province. 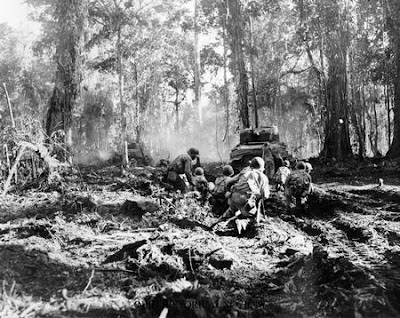 who sacrificed both physical and
emotional health in Bougainville, 1943,
but came home to live a long life.
Posted by Bud at 10:31 PM 1 comment:

Everyone's gone but me. They went wilderness camping.

Beware what you look at ...

A group of "conservative scholars" has gotten together to identify

The Ten Most Harmful Books of the 19th and 20th Centuries

(You know, what I don't see on here is My Pet Goat, which has been widely read in some circles. This is a test of your memories. Gold Star to the first one who remembers!)
Posted by Bud at 10:00 PM 3 comments:

FedEx always has some of the best commercials, and I think it's because they don't try to do too much. They keep the message simple and then use humor and great execution to drive it home. One of the best is the one where Ned is always wrong. We all know someone like that (and if you can't think of anyone like that, uh, well, it's probably you.) Anyhow, I was sitting here trying to think of all the things Ned was wrong about, and had to Google it on YouTube. Remember: Steely Dan is not one person.

Of course, I had to click around and watch some of the others. I had almost forgotten about "Jenkins", a classic:

Here was a great idea which didn't quite come off, IMHO. But "Bear, Hunter, Ninja" should have caught on in a bigger way:

And then I ran across this one, which I don't think I ever saw on the TeeVee.

I don't often hand out "mad props" at this hour, but it's worth noting that at 7:35 a.m. on a beautiful May morning, a Washtenaw County Road Commission road grader passed by our house. My gravel road was just starting to show a washboard pattern. Those guys are on the ball. They must make good coffee down at the big barn where they keep those big rigs.
Posted by scot s w at 7:36 AM No comments:

Why we're in Iraq

Jim Hightower recaps why we're really in Iraq. Well, we know it wasn't WMDs and we know it wasn't to bring democracy. We're now there fighting a "war" in a nation which we have claimed now has a "sovereign" government. Against who? Well, that doesn't get discussed too much, does it? We're fighting against unnamed insurgents and terrorists, supposedly, but never is an attempt made by our government to say who they are. That might prompt people to think about all this too much.

No, the real issue has always been oil, and trying to break to Saudi stranglehold on supply of oil. Jim Hightower gives an excellent rundown.

Thanks to Old Chip for sending the link, despite his apparent retirement from blogging.
Posted by scot s w at 10:36 AM No comments:

As a person who often drops things, I view this as unmitigated good news. Turns out there might be something to the old "5 second rule" about dropped food. It's almost scientific and stuff, too:

And here, I've always thought it was just a humorous fiction we use as a polite cover for eating fumbled food in front of others.
Posted by scot s w at 6:32 AM No comments:

Wednesday morning saw some pretty strong thunderstorms in our area. And by in our area, I mean in my front yard. At approximately 8:20 My Dell Dimension 8250 expired suddenly, an event announced by a blinding light and a deafening thunderclap. I gently prodded the power button a few times in disbelief, but when the little guy couldn't even muster a little *beep*, I knew it had given up the ghost. The undertakers at Computer Alley confirmed that the cause of death was indeed a fried motherboard.

And yes, I was using a surge protector.

After two days working off a laptop in the purgatory of Panera Bread, I'm pleased to report that I'm back surfing the Internets from home this afternoon, with a sharp-looking and more powerful new system. It's a custom-built job featuring dual 4.2 processors (well, the AMD equivalent) and pretty blue LED lights (oooh! Shiny!)

They were able to save the old hard drive, and install it as a back-up of sorts, which saved a huge amount of time in trying to salvage all my old data. Thank the Lord I saved a backup copy of the installer software for my DirecWay satellite internet connection. I thought getting my sat connection working again would be a nightmare, but it turned out to be pretty simple. For someone who uses his PC to put food on his family, it's crucial to have all the accumulated e-mails, Web bookmarks and e-mails to refer back to.

It wasn't easy -- and I'm a long way from having all the old software up and running -- but I was able to get the system work-ready in about four hours. And I get a DVD burner, a huge new hard drive and twice as much RAM in the bargain.

Old Chip has been talking about gun control lately. Following is a "SYCMU" story that should give pause to even the most pro-gun nuts among us. Apparently a sextet of unreformed racist rednecks from Alabama planned to drive down the road to the sleepy hamlet of Remlap and start a-shootin'. One of the guys is actually named Michael Wayne Bobo. That's right -- Bobo. His father's name is Bobby. No, really.

Were these boys serious? Oh yes...

"Authorities said agents during the raids last week recovered 130 homemade hand grenades, a grenade launcher, about 70 hand grenades rigged to be fired from a rifle, a machine gun, a short-barrel shotgun and 2,500 rounds of ammunition in the raids."

Since the plot didn't come off, and since it exemplifies just about every single backward-redneck-southern-racist-cooter stereotype, I decided I can include it in my SYCMU series. It's certainly good news that authorities caught on to these guys -- the thing to remember is that it is exceedingly rare for such yahoos to be as well-organized and disciplined as Timothy McVeigh.

But here's a pretty profound question, I think: Did you think about this as a terrorism story? Because we usually don't think of a cell of whacked white racists as terrorists, precisely. But that's exactly what they are: The goal seemed to be to terrify Mexican immigrants and keep them away. If they had carried out the plan and killed even a handful of victims, it surely would have been effective.
Posted by scot s w at 10:01 AM 3 comments:

Toledo seems to offer an inexhaustible supply of such stories. I don't think there's much I can say to embellish this latest installment in my semi-regular series, "Stuff You Can't Make Up."

Hector went on the ride of his life yesterday.

And it’s not one the dog or his owner want to remember.

The long-haired Chihuahua was dognapped and held for $50 ransom. He was bound with duct tape, a broken electrical device, and wires to look like a bomb. And he was thrown through the open front door of his owner’s North Toledo bar.

“It was hard [that] my dog showed up like that. [Hector] was shakin’ and carryin’ on, definitely disturbed,” said Jerry Dalton, 77, owner of Jerry’s Pub. “It was strictly indescribable. My dog, I love him.”

Yes, there's more. It's worth following the link to read the rest.
Posted by scot s w at 6:56 AM 4 comments: