I'm going to do something a bit unusual for me, and talk a bit about a stock I own. Normally, I figure that this sort of thing is A) sort of a private issue and B) kinda boring to other people, but in this case, I have a few points to make. First, let me post for you part of a short AP story from today about a company in which I own significant stock:

After reporting strong first-quarter results, the Sunnyvale, Calif., company said it expects revenue to increase 42 percent for the year, which implies sales of $853.2 million. Earlier, the company projected 40 percent growth.

ThinkEquity analyst Stephen Ogilvie downgraded the stock to "Accumulate" from "Buy" on the news. Ogilvie said Intuitive's first quarter was good and the company is in good shape, but he does not expect the stock to rise. He kept a price target of $360 per share."

Okay. First let me say that you can't get mad at the market: It is what it is and it does what it does. Fine. But analysts and media are another story. They're usually a beat slow and a step behind.

In this case, the writer points out that the company's forward earnings expectations fall $4 million short of analyst expectations, out of a total $850+ million. Fair enough, but for those keeping score at home, that's LESS THAN HALF OF ONE PERCENT!! And if you know the company's product -- surgical robots -- you understand that's a shortfall of two -- 2! -- systems. Over the next 12 months.

I would submit a better reading of events is that the stock had been speculatively bid up just prior to yesterday's earnings announcement and conference call. Maybe worth mentioning, if you're a decent reporter.

Secondly, ThinkEquity analyst Stephen Ogilvie is an ass. There, I said it. He's closing the door after the horse has left the barn. If he'd had something to say BEFORE the earnings announcement and 15% share price drop, that would have been worth something.

But if, on Wednesday, when the stock was at $350/share, he had a "buy" recommendation and a 12-month target price of $360, how is it a worse investment two days later at $295/share? I mean, as the AP article clearly states, he's not changing his expected target price. Most people think a thing is a better deal when it's on sale, not a worse deal.

Anyhow, not that I'm blaming Stephen Ogilvie or the AP for my little turn of fortune this week (and I'm not worried about this company in the long term AT ALL), but sometimes this kind of stupidity just needs to be called out.

If you watched/read about/heard about the ABC "debate" that took place this week, you probably share my disdain for where we've come. America's political discourse has never been the angelic model of civic-mindedness many people seem to "remember" but I don't ever recall it getting quite this inane before at the presidential level. I do have to admit, the Goring of Gore came close, but the ABC charade was a new low, because it dwelled so happily and delightedly in the muck of this campaign, with a blissful ignorance of all the huge issues pressing in on our world.

And while Barack Obama came off as a bit beleagured during that debate, he did not crack, and did not sink to... oh, let's call it bitterness. He didn't dive in. And the next day, I think he adeptly turned that debate into an object lesson of why he's running. I think he's ready for this job.

In historical terms, almost wiping out a disease isn't much use. It may greatly help a few generations, of course. But almost certainly, absent a total victory over these pathogens, they will incubate, mutate and replicate again, more virulent or resistant than before. So, while we may all pat ourselves on the back for the brilliance of modern medicine, I've always felt we've been fooling ourselves.

Eradicating polio -- which the world almost, almost did -- would be an immense relief. We're not out of the woods yet.You may be surprised to learn that about 2,000 people are still diagnosed with the disease every year. Vaccinations have cut the incidence of polio by about 99 percent, but fewer and fewer of us have had the vaccine.

If polio were truly and finally eradicated, humans could all breathe a collective sigh of relief. No child would ever again be laid low by that disease. We're close, and continuing international programs have a good chance to finish off the poliovirus in our lifetime. It would be only the second disease ever declared eradicated, after smallpox (see Wikipedia for more.)

Similarly, malaria is a disease that we probably COULD eradicate if we had the money and political willpower. There are four strains of malarial parasites which can cause disease in humans. These protozoa still kill about 3 million people a year. And Wikipedia says that as many as 515 million people -- a good percentage of the world's population -- fall ill every year. It may be a chief cause of perpetual poverty in the world's tropical societies.

The big pharmaceutical companies of the world have no incentive to cure these diseases, of course. As Chris Rock astutely points out, the money ain't in the cure, it's in the treatment. Given the truth of that point, maybe the challenge is to put the money back in the cure.

So what if the great health charities, such as the Gates Foundation, were to sponsor a contest. The could raise great piles of money and offer it as a prize to the company which can succesfully eradicate these pathogens worldwide. There could be smaller prizes for partial success, but the big prize comes from permanent victory. We might attack other diseases in similar fashion. Put the profit back into the cure.

The idea of using a prize to spur innovation is nothing new. From the X-prize for a privately-financed spaceship, to the quest for a 100 mpg car, piles of money drive the world's visionaries to put their ideas into practice. The best ideas find risk-tolerant entrepreneurs to back them, and even when they fall short of the final goal, they move the ball forward.

I think that would work with disease. As we pick off diseases, we should be able to devote more and more of our resources on the ones that remain. Let's do it before natural selection produces generations of "superbugs" which overrun the progress we've made.
Posted by scot s w at 11:57 PM No comments: 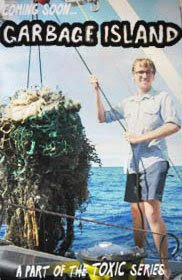 A floating island of plastic garbage the size of Texas. A crusty old boat captain. A doctor. A Mexican scientist. And film crew of geeks. Makes for good TV, but this show is on the Web.

This will give you some serious thoughts about all the extraneous plastics in your life.

It has been pointed out to me by helpful friends that the Detroit Tigers have failed to win a single real game since, in the heat of pre-season excitement, Tdec and I purchased a 27-game package of tickets. While I'm more likely to blame the Tigers' all-too-quiet bats, I have to admit that according to the laws of quantum physics, it IS possible that our decision to buy these tickets is the primary reason the Tigers are losing. But the odds are against it.

My preferred theory is that the Tigers are just enduring a perfect storm of slumping pros. And there's a common thread to them all: This team wasn't ready in time for the regular season. I understand the feeling of Leyland & Co. that the starting pitchers and everyday players are all established pros, and you don't need to harangue them to get ready. But these guys were not on their game coming out of Florida (by way of Houston), and they still are not. They're still a step behind the Royals and White Sox, obviously, and those 6 losses will hang around their necks like a weight the rest of the season.

I notice that the Tigers starting pitching has looked good for about four innings or so, and then fallen off considerably in quality. That's a TREND thus far: Good stuff, generally, but not enough stamina. Bonderman's speed tailed off in the 5th, and the other starters have marred their first four innings with substandard fifth and sixth innings. The Tigers' bullpen has been pretty good, actually, after clearing the basepaths of inherited runners. That caveat is a big deal though: If memory serves, I think almost 100% of runners inherited from starters have crossed the plate. The inability of Tigers pitchers to strand inherited runners has been a peeve of mine for a couple years now.

And of course the big bats have been silent. Some people think that maybe -- because Polanco, Guillen, Rodriguez, Cabrera, Renteria and Ordonez all just happen to be slumping players born, raised and trained to play baseball in much-warmer climates -- that maybe just maybe the weather has been a factor. It's not a crazy theory, but I have no idea how you prove it.

There's no doubt that players need to prepare for the cold, as it does change the game. I noticed that a lot of pitchers had control problems on the coldest days. The difference is that our opponents were pounding pitches into the dirt, while the Tigers arms were peppering the backstop. Which reminds me of Dontrelle Willis' pre-season comment that he had never SEEN snow. How much snow do you think Willis' perenniel teammate Miguel Cabrera has seen?

The fact remains, however, that their bats have been cold as ice the past week, and the weather can't be an excuse. Opponents are playing in the same conditions. So, even if cold wasn't the cause, my hope is that averages rise with the thermometer. But I know things will get better, as of course they can hardly get worse.
Posted by scot s w at 10:47 AM No comments:

From his cold, dead fingers...

So Charlton Heston has passed away at the age of 84.